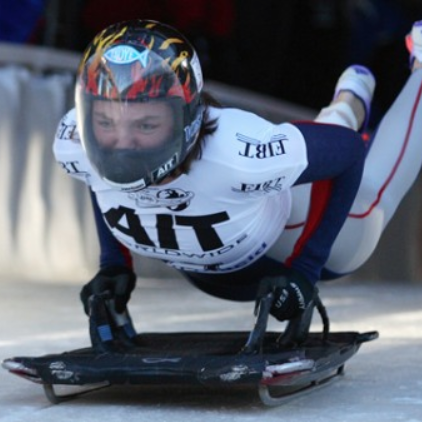 In His Presence - LeaAnn Parsley

I was blessed to be the first female athlete to win a World Cup medal for the USA in the sport of skeleton when I took the silver medal in the 2000 World Cup in Lillehammer. I went on to win four more World Cup medals and an Olympic silver medal during my short sliding career.

I had never heard of skeleton until I was doing some research on the internet for women’s sports. A winter sports web page popped up and I started to learn about women’s bobsled and skeleton. I called the office in Lake Placid and asked how someone could get involved and the next thing I knew I was driving to New York to check it out.

When I first made the World Cup team in 1999, I found myself surrounded by some teammates and coaches who did not share my same beliefs or values, and that was difficult. I also traveled abroad for the first time and met people of different cultures and attitudes. I had to figure out how to reconcile all of these different attitudes, cultures and beliefs with what I believed to be the truth.

Prior to this time, I never questioned what I had been taught as a child and never had to defend what I believed to be the truth. I grew up in the safe and loving environment of a family that followed Christ; I had never ventured far away from home or from people who shared my beliefs. Around the age of 11, I attended a special series of classes designed for young people where I learned who Jesus was and what He did for me. At the end of the classes I decided to ask Christ into my life and I was baptized. Although I accepted Christ as my Savior then, it wasn’t until many years later that I began to feel His presence in my life.

As I stood up for what I believed, my answers to tough questions were often challenged. I may have felt uncomfortable, and sometimes under attack, but it made me find those answers for myself instead of just reciting what I had heard my parents and teachers tell me. I think those experiences were part of God’s way of making my faith my own, instead of something that was simply handed down to me.

In late 2005 I was [again] on my way to making the World Cup team, which was the first step in making the 2006 Olympic team. I really felt I was in a good position to earn an Olympic spot. However when a runaway bobsled ejected out of the track and hit two of us, I suffered some injuries that were not serious compared to my teammate Noelle Pikus-Pace, but never-the-less affected my ability to compete in the team trials two days later. It was the timing of my injuries that proved to be the final blow to my career.

I was upset, but then God showed me that my identity was not wrapped up in being an athlete and my Olympic medal did not define me. First and foremost I was a child of God and if He didn’t want me to go back to the Games then I needed to accept that and move on. As it turned out, He had other plans and I went to the Torino Games as a coach instead of as an athlete. I could have stayed home and been disappointed but I went with my team and prayed that God would show me how I could help them in my new role.

I think that my relationship with God has allowed me to keep my life in perspective, and that can be a very challenging thing for an athlete, especially at the international level. In order to be a successful athlete, you have to be a little selfish. By that I mean you spend a tremendous amount of time focused on yourself. You dissect and analyze everything about yourself in order to improve your performance. It doesn’t allow a lot of time to focus on other people and their needs because you are always pressed to take care of your own. Athletes feel as though they have to live up to the expectations of family, friends, coaches and sponsors who have put a lot of time, energy and money into them so you have to stay focused on yourself to get the job done.

I think athletes who have a personal relationship with God have a better chance of keeping a more grounded perspective on life because we know it’s not all about us, it’s about God. I think that allows us to deal with the pressure a little better because we can step back and see our sport for what it is within the bigger picture of life. I feel this outlook helped me stay focused and calm during the 2002 Olympic Games in Salt Lake City when I won a medal.

Having a personal relationship with God affects every aspect of your life and that includes your attitude, your motivation, your goal setting, etc. Without God, our motivations often come from outside (rewards, financial gains, fame, etc), but when we have a personal relationship with God the source of motivation starts to come more from within. We desire to do well not because of something we might receive, but from something we can give, as in giving God the glory.

So, unlike some athletes whose goal it is to be the best, my goal has always been to be my best and I let God take care of the rest. If that means I win a medal, great! And if not, then that’s fine too. For example as a student and nurse I pushed myself all the way to a doctoral degree in community health. As an athlete I pushed myself all the way to an Olympic medal. As a firefighter I pushed myself to be the top cadet in my class and was awarded the State of Ohio Firefighter of the Year for my part in helping to rescue a woman and her daughter from their burning home. I take care of the effort and God takes care of the rest.

I will say that I do receive a lot of satisfaction out of doing well, so it’s not all about giving. However, as Eric Liddell said, “When I run, I can feel God’s pleasure.” I love that quote because I understand exactly what he’s talking about. When I am doing what God wants me to be doing, and I’m giving it everything I’ve got, I can feel God smiling on me. That is a great motivator! I feel like I draw closer to God the more I put myself in line with His priorities. Like most Christ-followers, I wish I did a better job of spending more time in His Word and more time in prayer because I know those are the best ways to be close to Him. That is something that I struggle with on a daily basis because my schedule can get really hectic at times.

I have had times when it has been hard to walk with God, and one of those times is now. My current difficulty lies with my struggle to deal with what feels like unanswered prayer. I have a brother who is fighting cancer and a dear friend who is an unbeliever and I have struggled to feel God’s presence in both of those situations. I know it is a time of learning and patience but it’s been very hard. I feel I am in the midst of one of the biggest spiritual challenges of my life

I don’t know where God is headed or what He has planned for either of these two men in my life, and I have to trust Him in ways that I never had to before. I think you have to start with waking up every day and recommitting the next 24 hours to Him. I’m relearning it’s a daily process to follow wherever He is leading, not a one time deal.

Time and again He is the One I come back to when I am in search of truth. The Christlike worldview is simply the only one that makes sense to me and the only one that seems to be able to explain the world we live in. The love of Christ also brings a sense a peace that I cannot find anywhere else. When I’m anxious or worried about something, He is the only one who can calm my fears. Jesus Christ helps me to love those that I can’t love on my own and He helps me forgive those I couldn’t forgive on my own. He helps me to find purpose even in the most painful events and He helps me make sense of the chaos that often surrounds me. He is what holds my life together.

Right now I am working for the international federation that governs the sports of bobsled and skeleton (FIBT) as an independent color analyst during a few of the broadcasts of the World Cup races. If all goes well I should be in Vancouver to do the same with NBC. The work with the FIBT is like a test run so we’ll see. As I said, I’m doing my best to learn a new role and I’m giving it my best shot. I’ll let God take care of the rest.

In His Presence - LeaAnn Parsley